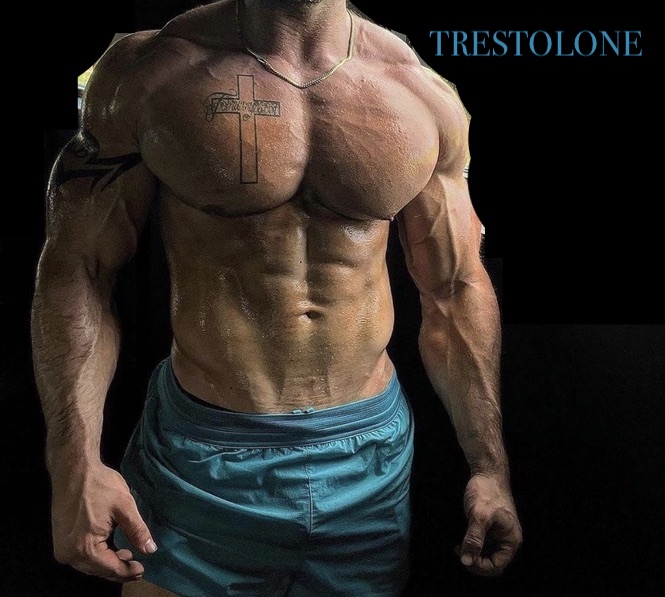 Despite the fact that Trestolone is an old anabolic steroid, it has become more and more popular only in recent years. Mainly, that’s because of people who are reporting gains of about 20 pounds in short periods of only 6 weeks.

Bodybuilders who have experience with this compound say that Trestolone is a mix of Trenbolone and Testosterone. If you’ve ever used these two steroids, you most likely know what I’m talking about because these are two of the most effective and favorite anabolic steroids for bodybuilding.

In this article, we’re going to get over it and find out what’s so remarkable about this steroid. You also need to know that it goes by the name of MENT – Trestolone Acetate.

MENT or Trestolone Acetate (chemical name 7alpha-methyl-19-nor testosterone) is one of the several 19-nortestosterone (19-nor) derivatives same to Nandrolone. Basically, it is nandrolone that has methylation added, but this small chemical structure made a huge change in the way the steroid works. And generally, this change makes it a very unique steroid with very unique chemical properties.

For this reason, Trestolone is a steroid that was researched as a possible male contraceptive therapy. That’s because initially, drug companies were combining progesterone with testosterone to suppress spermatogenesis. Progesterone has the ability to suppress it and testosterone can decrease sperm production, but the dosage should be too high to make it effective. Therefore, it causes side effects.

For example, testosterone converts into DHT via 5 alpha reductase. This leads to an increase in DHT levels and therefore, side effects. However, MENT is a steroid that is not binding to 5 alpha reductase. That’s why it doesn’t convert into DHT. For this reason, many bodybuilders think that Trestolone can be a great option for those who suffer from male pattern baldness, an increase in prostate size, or acne.

Yet, I would be very careful with Trestolone because although it cannot convert into DHT, it still converts into estrogen through aromatization, and plus to that, it has other androgen dependent functions too. And generally, this is a very powerful steroid.

Some think that it effectively acts as testosterone in the body despite being a 19-nor derivative steroid. That’s why many also think that this is uniquely the only steroid on the market that you can use without a testosterone base in your cycle. I would still be very careful about this.

Other good news is that trestolone was showing a weak binding affinity to progesterone and mineralocorticoid receptors. That’s while it still remains a nandrolone derivative.

It’s also worth mentioning that MENT has another unique property – the fact that it does not bind to SHBG (Sex Hormone Binding Globulin). This is a protein type that binds to androgens (testosterone), and that’s why this protein does not bind to androgen receptors.

By taking into consideration that Trestolone Acetate is not binding to SHBG, it means that Trestolone is actually free to bind only to the androgen receptors in your body. Therefore, this helps you yield the benefits of this anabolic steroid.

What Does Research Say About Trestolone?

According to research, MENT is actually a very impressive steroid. And as I’ve already mentioned, it’s a very unique steroid. According to a 1992 study on rats that were investigating the pharmacology of MENT, this steroid is having an immense anabolic potency. Although its anabolic rating was lower, the anabolic potency seemed to be 10 times greater than that of testosterone. Moreover, that study found out that Trestolone is also 12 times more suppressive to your HPTA.

This is the main reason why I recommend being extremely careful with Trestolone, especially when it comes to using it without a testosterone base in your cycle.

Anyway, back to that study – that means that if the average male is producing about 4-7 mg of testosterone on a daily basis for maintaining muscle mass and proper sexual function, then only about 400-700 mcg a day of trestolone on a daily basis is going to produce pretty much the same results.

By the way, the same study was calculating the half-life of Trestolone which found out that it is unbelievably short – only 40 minutes. According to the study, MENT plasma levels were reached super fast for the non esterified compound. This is the reason why you are unlikely to find (or even need) an unesterified Trestolone version. But the half-life with the Acetate ester, as expected, was extended significantly.

Another study on humans was conducted on males. That study was comparing the effects of Trestolone to the effects of Testosterone. This study was 48 weeks long and contained 29 subjects. It was done to check the spermatogenesis and sex drive as well as safety biomarkers associated with the use of exogenous androgens.

According to the study, both groups were significantly reducing their sperm production from an average of 55 x 106 mL to only 1 x 106 mL after only 12 weeks of supplementation of these compounds. The study indicated that the recovery for the MENT group was 16 weeks which recovered back to 20 x 106 mL but with the testosterone group it was until after week 28.

So, when it comes to the form of contraception, Trestolone seems safer while it is definitely more powerful. But there are still some issues with it.

MENT is extremely suppressive to HPTA (it drastically lowers LH and FSH) and in addition to that – it’s aromatizing. But the problem is that Trestolone is converting into a really powerful estrogen type: 7a-methyl estradiol.

On paper, Trestolone is an extremely powerful anabolic steroid that has a huge anabolic activity with slowly lower androgenic activity and inability to convert into DHT. Nonetheless, it’s still capable of aromatizing into estrogen. This is a 19-nor derivative steroid (nandrolone) but despite this, it doesn’t come with the famous side effect of nandrolones of lowering sex drive. In fact, it can increase libido. Yet, at the same time, it lowers sperm, making a man way less likely to conceive a baby.

While it seems to be 10 times more powerful than testosterone on paper, it obviously won’t help you increase 10 times more muscles or 10 times faster. Nonetheless, it’s obvious that with a proper diet and workout plan, MENT is very likely to help you pack on noticeable muscle mass and strength gains.

What To Expect From Trestolone?

After only four weeks of using Trestolone Acetate (MENT) at only 50 mg every other day (EOD), you can expect some quite great gains. Some believe that you can run it alone, although I think that more research is required. You can attempt it and see how it goes for you though. During this cycle, you’re likely to experience great sex drive and great gains. But your spermatogenesis, FSH, and LH will greatly decrease and you’re likely to experience estrogenic side effects too. For these reasons, I do not really recommend a cycle length longer than 6 weeks, but 4 weeks MENT cycles should work just fine.

During the cycle, it’s very likely for you to notice an increase in appetite and it can occur really fast after starting with Trestolone Acetate. You will also notice a fast improvement in gym strength. However, you need to prepare a PCT plan after the cycle and have anti-estrogens handy if you notice estrogenic issues during the cycle.

The good news though is that although it’s a methylated version of nandrolone, it’s not hepatotoxic. It’s an injectable steroid that doesn’t pass through your liver so it’s not liver toxic. That’s why it’s also safer on the lipids too. Yet, due to the harsh suppression of HPTA (LH and FSH) a Post Cycle Therapy (PCT) plan is absolutely mandatory.

When it comes to stacking, it pretty much can stack with whatever other steroid you wish depending on your goals. But due to its immense potency, I recommend being very careful with it alone, not to mention when you stack it with other steroids.

Because of the potency, people report great gains at only 100 mg per week! Such as 25 mg EOD. Obviously, at 50 mg EOD the gains will be more intense, but so will the side effects. Yet, just imagine the gains of 300-400 mg/week. They are likely to be crazy! But so are likely to be side effects. That’s why I only recommend such high doses only to advanced users. Moreover, I surely do not recommend increasing the dosage to over 400 mg/week.

It’s important to understand that so far, Trestolone MENT is still a research compound. This steroid has no medical uses and is still not as popular as other steroids. That’s why, except for the fact that it can be much harder to find this steroid in comparison with other anabolic steroids, there’s a high chance of obtaining bunk Trestolone.

In order to easily find MENT and make sure that it’s of the best possible quality, I strongly recommend you to buy it from Iron-Daddy.to.

We’re a very popular online anabolic steroid source proving that there are lots of people having trust in our products. That’s because the steroids we carry are of low prices, yet the highest possible quality.