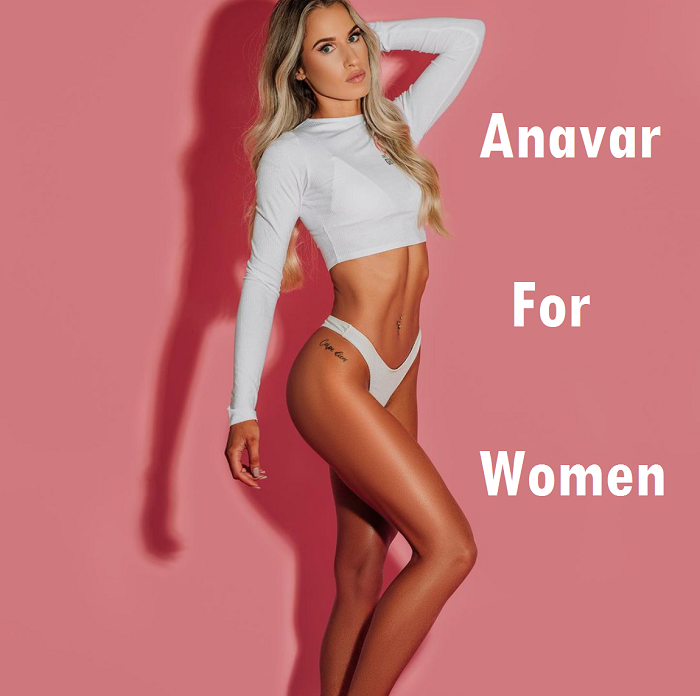 Anavar is the most popular brand of the anabolic steroid Oxandrolone. Very often, you could hear people call Anavar “the girl steroid” because of how popular Anavar is for women. It’s the most popular steroid for women searching to enhance their physique and performance.

Anavar (Oxandrolone) is such a popular steroid for females because of the very limited options of steroids that women can use. At least, as long as they want to stay away from virilizing issues and maintain their femininity intact. Anabolic and androgenic steroids (AAS), including Oxandrolone, are androgenic compounds that boost male sexual characteristics. This causes virilization symptoms in women.

Virilization is basically masculinization. When a woman starts looking, behaving, and even thinking like a man. Some popular symptoms of virilization include: deepening of the voice, may start to grow hair on the face and/or body, growing of the clitoris, shedding hair, mood changes, menstrual irregularities, and others.

That’s why women have a much lower natural tolerance to steroids than men. Therefore, women need to find compounds without big risks of virilization. Considering that all steroids are androgenic – they have very limited options. Anavar is one of them. In fact, it’s the best for women because other more powerful steroids might be more effective, but with higher risks of adverse effects while others that are milder in adverse effects – won’t be as effective.

Anavar (Oxandrolone) is the sweet balance between benefits and side effects. It has a low risk of causing virilization symptoms when you use it in correct dosages and cycle length. Yet, it remains highly effective. Still, it is important to remember that it’s not risk-free!

What is Anavar – Oxandrolone?

While attempting to create a product that would be safe for men, women, and children in treating muscle wasting diseases, scientists created Oxandrolone. The compound’s most popular brand name is Anavar, yet you could find it as numerous other brands too.

Oxandrolone remains an FDA-approved anabolic steroid for numerous health conditions. Mainly, for increasing patients’ lean muscle mass in specific health issues. This proves how effective and safe this steroid remains for such purposes.

Anavar (Oxandrolone) half life is 9 hours. It has an anabolic activity of at least 320 and low androgenic activity of only 24, on paper. Additionally, this is a DHT derived steroid. Therefore, it won’t aromatize into estrogen.

This makes Anavar an extremely popular steroid for bodybuilding purposes. Both for men and women.

How Does Anavar Work?

This is a great advantage of Anavar as it won’t cause high estrogen symptoms associated with high blood pressure, water retention, and others.

Being an anabolic steroid, Anavar would help you gain muscles. However, Anavar isn’t the most powerful steroid out there. That’s why it won’t turn you into a bodybuilder.

The gains would be moderate, without looking bulky. It just subtly increases muscularity, which greatly improves muscle tone. That’s very important for a woman. Moreover, it’s an awesome steroid when you’re in a cutting cycle trying to lose fat. Usually, low calorie diets lead to muscle loss alongside body fat loss. But with Anavar, you would maintain muscles and burn fat more efficiently.

The main reason why women use Anavar is perhaps its ability to burn body fat. It does so thanks to its insulin regulating effects and anti glucocorticoid effects.

It also regulates insulin, another hormone that is extremely important in weight loss processes. Anavar is so effective that it even increases T3 hormone levels. This is a powerful fat burning hormone.

Thanks to all of this, Anavar would greatly help both women and men to reduce not only subcutaneous fat but visceral fat too. It’s very possible for a woman to lose 1-2 kg (2-3 lbs) of fat a week during the Anavar cycle. Of course, when combined with a proper diet and training regimen.

While it wouldn’t turn you into a strongman, your muscular strength increases. That would greatly help a woman during her training sessions. You would perform better and that would surely offer even more results in turn.

Oxandrolone remains an anabolic and androgenic steroid, thus, is capable of causing virilizing issues. Why do we call it female friendly then?

Chances of masculinization in girls and women are low. According to research, dosages of Anavar would need to be high and taken for long periods for virilizing effects to occur. Of course, it depends on your personal tolerance too, but it’s uncommon for moderate doses for short periods to cause virilizing issues.

You need to remember that virilizing issues don’t occur overnight. That’s a gradual effect. So, you can stop it in case you notice any issues. This would reverse the virilizing symptoms. They can become permanent only if you continue the use of this steroid despite the onset of virilizing symptoms.

According to studies, a group of girls with an average age of 9 years old experienced virilization such as clitoral enlargement and deepening of voice after continuing the use of Anavar for a year! By maintaining cycle lengths in the 4-6 weeks range, such issues are very unlikely to occur.

Anavar For Women Side Effects

Nonetheless, cholesterol issues are a rare phenomenon in women. It’s because of their natural lower testosterone production compared to testosterone in men. On top of that, women run much lower Anavar doses for shorter periods than men do.

Anavar is an orally active C17AA steroid. It passes through the liver before entering your bloodstream. This causes liver strain. However, Oxandrolone is much milder than other AAS. This makes it much safer for your liver than other oral steroids.

These are common side effects that can occur with almost any other oral compound. It highly depends on genetics and personal tolerance. Some examples are nausea, stomach pains, dizziness, headaches, and others.

Anavar Dosage and Cycle For Women

After you learn how this steroid affects ladies, you should learn how to use it correctly, if you plan to do so.

Anavar comes in the form of tablets, commonly in dosages of 2.5 mg, 5 mg, and 10 mg strength. While there are other versions, those are suitable for men.

Dosage for women ranges between 5 mg and 20 mg per day. The most common Anavar dosage for women is 10 mg/day. Only women who previously used Oxandrolone know what to expect, and wants more results may up to the maximum of 20 mg/day. I would recommend starting with 5-10 mg/day for one month (4 weeks). This dosage and cycle length is enough for you to have an idea of how this anabolic steroid works for you. I strongly recommend against a dramatic increase in dosage because you never know how your body might react to that increase.

Oxandrolone half-life is only 9 hours. Because of the shorter half life and fast elimination from the body, it’s best to split the total dosage. This is a rule that applies both to men and women, regardless of the goals, daily dosage, or other factors.

If, for example, you administer 10 mg/day, then I would strongly recommend using 2 tablets of 5 mg every 12 hours, at least. Alternatively, you could even use 2.5 mg every 6 hours or so. To maintain maximum stable levels of Oxandrolone in blood. While first-time using Anavar, keep a close eye on side effects. If you notice harsh side effects, especially related to masculinization, stop the use of this steroid immediately.

It’s very important to always start with a lower dosage. Then you can gradually increase it as you notice that your body responds well to this drug.

Anavar cycles for women range anywhere between 4 and 6 weeks, most commonly. I do not recommend longer cycle weeks due to a variety of reasons. Cholesterol strains, liver damage, and virilizing effects – all get worse by running Anavar for longer than 6 weeks.

However, if you notice any issues, stop the use of this steroid sooner than 4-6 weeks. Commonly, 4 weeks for beginners, 5 weeks for intermediate users, and 6 weeks for professionals.

As said, split the total daily dosage into at least 2 even halves.

Using Anavar on an empty stomach increases absorption and effectiveness. But it may increase liver enzymes and the risk of stomach pains.

200 ml of grapefruit juice has an effect on the liver enzymes and this enhances the effectiveness. While it could save you money by taking less doses, it could increase side effects. You either avoid drinking grapefruit juice while on Anavar or start with an extremely low dosage of 5 mg/day with grapefruit juice (200 ml) for at least 2 weeks to see how you feel on this dosage.

Point is to be very careful.

Anavar for women is the most popular anabolic steroid and there are good reasons for that. It’s an ideal steroid for those women who want to burn body fat while concomitantly increasing lean muscle tissues, but without turning into a She-Hulk and without huge risks of virilizing (masculinization) effects.

That’s all thanks to unique Oxandrolone properties – high anabolic activity combined with low androgenic activity. Because it’s not having high risks of androgenic side effects, it’s hard to imagine a better steroid for women.

After all, Anavar is one of the very few steroids out there still FDA approved for medical use. It just proves the excellent safety profile of this drug. There are no huge long-term health issues you have to worry about. Even if you do experience side effects, they would be bearable, and they all disappear as soon as you stop the use of this steroid.

With the proper administration of Anavar, you can avoid side effects and yield maximum results from a cycle. It’s also essential for you to have a diet on point and a proper workout plan for the best results.

But generally, Anavar is an amazing steroid. It’s safe to use with great results.

FAQs about Anavar For Women

How Long Does It Take To See Results?

Anavar’s half-life is about 9 hours. This means that from your very first dosage, the steroid is going to start working. It takes just a matter of hours to kick in the system and “do its job”. However, you are going to notice some changes after about 2-3 weeks of using this steroid. The most noticeable results appear at the end of week 6.

But remember there’s a lot to take into consideration too. It varies from one person to another depending on dosage, personal tolerance, and lifestyle. It won’t work for someone who uses it and sits back and relax. You have to maintain a great diet and exercise plan for maximum and faster results to appear.

Can I Can Other Steroids With Anavar?

I wouldn’t recommend women stack Anavar with other anabolic steroids. The higher the dosage and/or the number of steroids – the more likely to experience virilizing issues. Anavar is one of the mildest steroids in terms of virilizing effects. Other steroids that women generally run are Winstrol (way harsher and likely to cause side effects) and Primobolan (milder, but not as effective). If you stack any of them, you greatly risk your femininity.

Instead, you could stack it with Clenbuterol if you can tolerate this product. That’s because Clenbuterol is not an anabolic steroid. It’s a stimulant that won’t cause virilizing issues and only helps burn fat. It won’t help grow lean muscles and has other side effects though.

Can Anavar Mess Up With My Menstrual Cycle?

Where Can I Buy Best Quality Anavar?

Iron-Daddy.to is the best anabolic steroid store. You can buy Anavar for sale including numerous other anabolic steroids. We’re offering maximum quality products from manufacturers with GMP accreditation!